All Collections
Tasks & Activities management
Tasks
What are "Tasks"?

Written by František Vondrák
Updated over a week ago

Tasks are a subcategory of a Project. This valuable feature is especially suitable for “one-off tasks” such as “Design of a new icon”, or “Review code from a reported issue”, etc., especially because Tasks can be marked as completed, one by one, and still be kept as an integral part of a main Project.

As you can delineate very clearly the attributes of a specific Task (budget, planned time, associated client, price per hour, etc.) this configuration will then start to characterize the Project over time, adding more detail to its elements and therefore contributing for a more distinct representation of how effectively you spend your time and how productive are your daily assignments.

To get to the “Tasks” subpage, do the following:

The attributes of Tasks

The “Mark task as completed” option 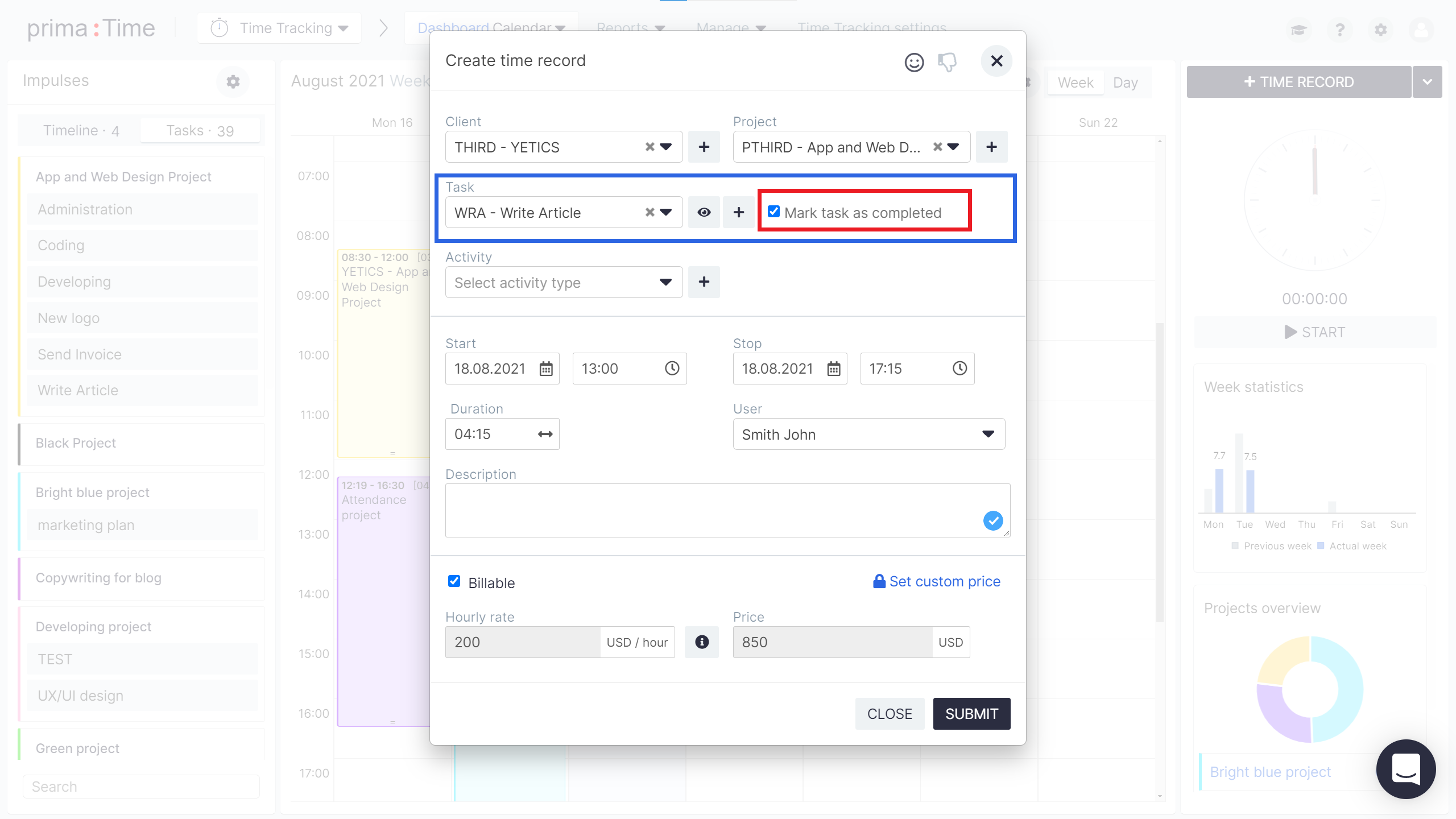 Marking a task as completed will remove it from the active list of tasks you may select tasks from, whenever you create a new time record. This will make your list of tasks clearer and less redundant.

Learn how to mark tasks as completed in this article. 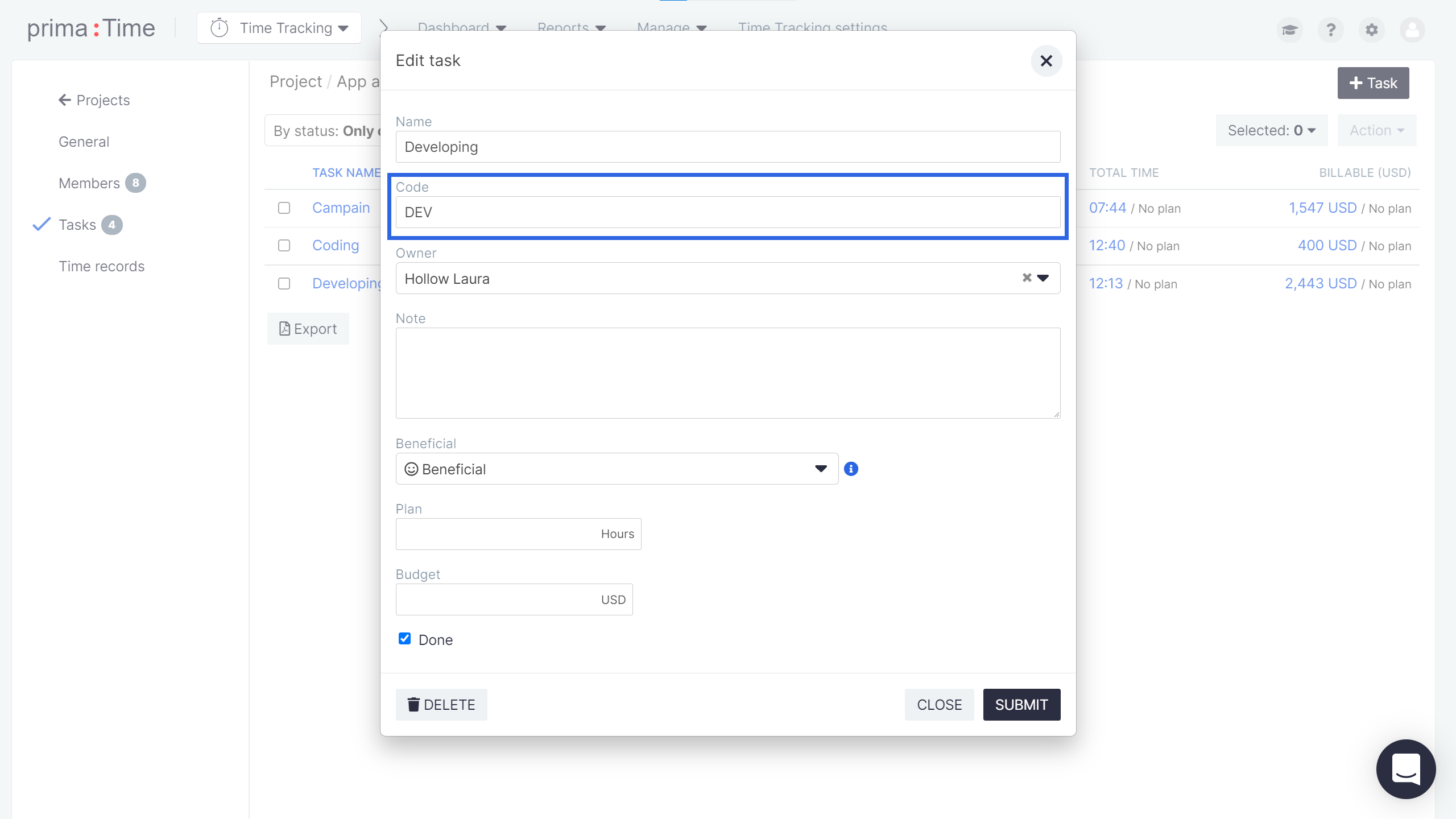 The code can be used, for example, for performing a quick search when creating or editing time records. The code's length is not limited, however, we encourage you to keep it between 3-5 letters. For instance, the code of the task “Document analysis” could be “DOCA”.

This “code” can be set during the process of creating new tasks or by editing previously created ones. 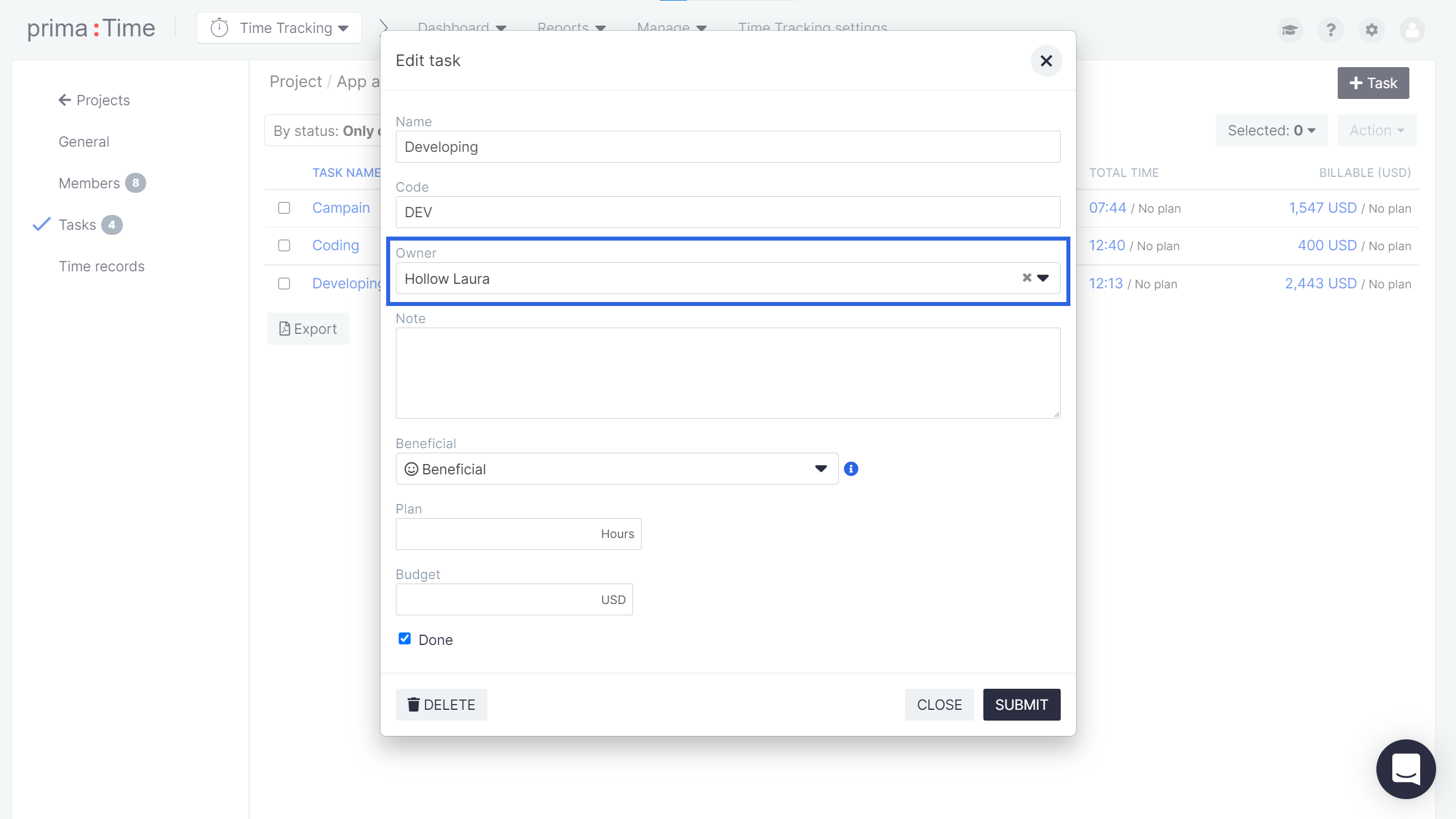 A task can only have one appointed assignee. When creating a time record, only the assignee of that particular task will see it in the list of available tasks for its related project. This feature will help your colleagues and teammates keeping a clear list of dedicated tasks to choose from.

Tasks of a particular Project with no assigned owner will be visible to all the members of that project.

Task's assignees can be set during the process of creating new tasks or by editing previously created ones.

Let's look at the example below:

You are logged-in under the account "Smith John". In the project — “Brand campaign”, there are two tasks:

When creating a new time record, only the tasks that are assigned to you are among the options to create time records from, as seen below:

In case there wouldn’t be any assigned users, both tasks (Designing new icons and Document analysis) would be visible to you, as well as to everyone else participating in that project. 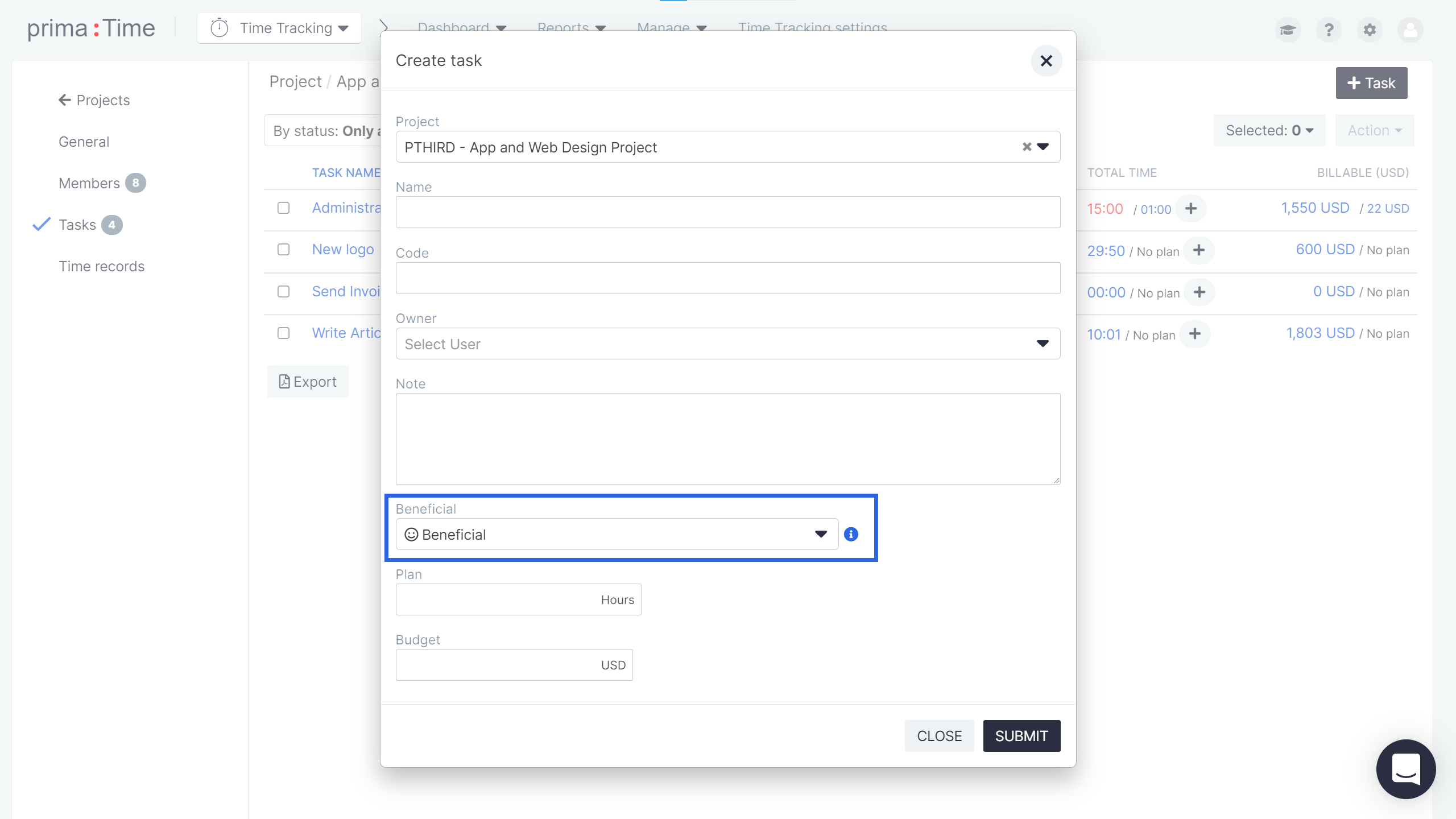 By default, tasks are always set as "beneficial", setting time records created under those tasks as “beneficial” as well. If the option non-beneficial is selected, by unticking the correspondent checkbox, then the task and all its associated time records will be considered as “non-beneficial”.

Since tasks are part of projects, this attribute allows you to evaluate, in retrospect, the gains or shortcomings of your work, as a whole, characterizing thus each project on its ultimate value. 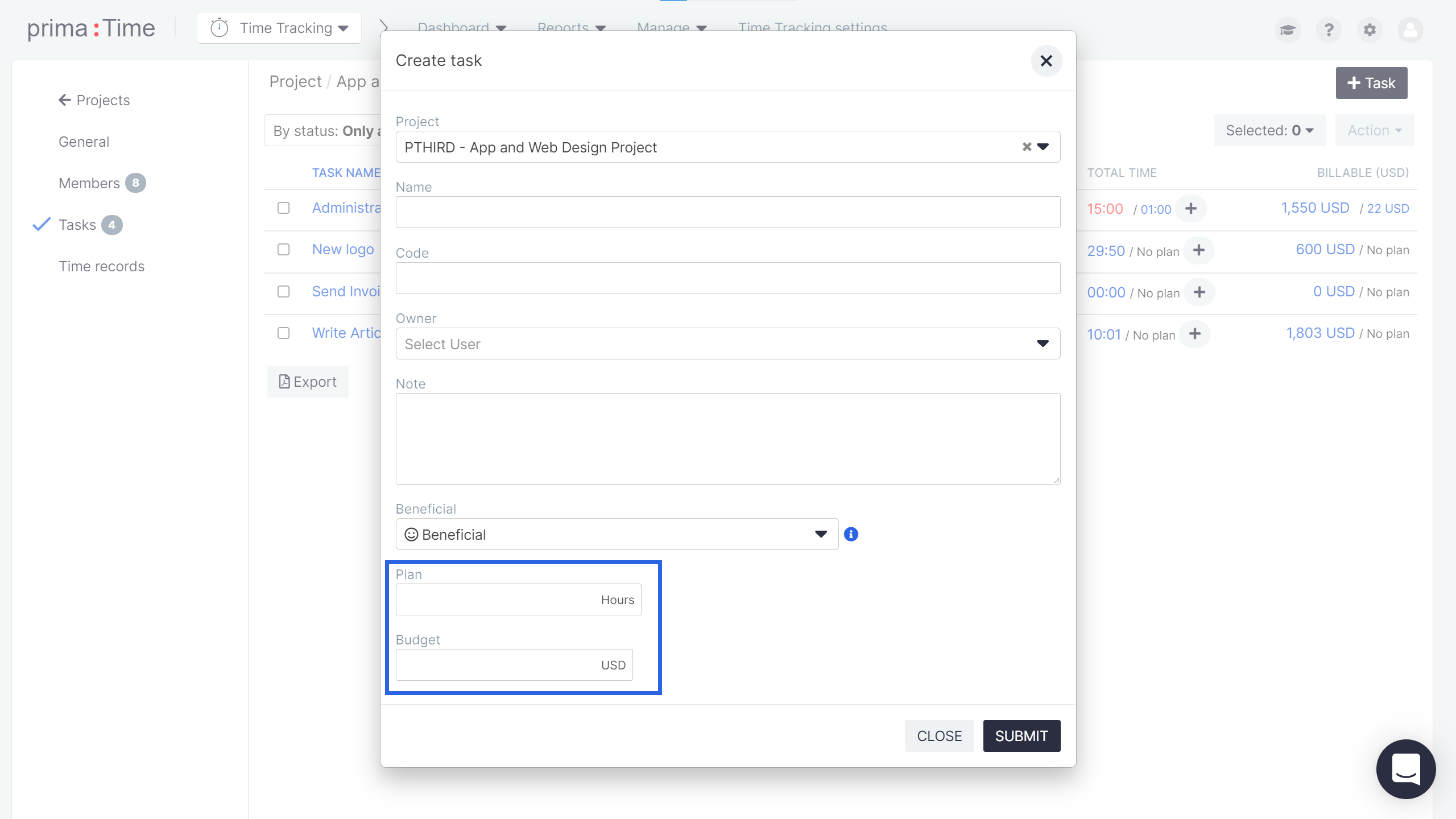 Add here the amount of time you plan to spend on the task. If the planned hours are surpassed, a symbol containing a red triangle will appear, signaling that the correspondent task has already exceeded the originally outlined plan.

In the same way, you can also add a budget to a task. Note that this option is available only for billable projects. As for the plan, if the budget gets exceeded, a red triangle symbol will appear, signaling that the correspondent task has already exceeded the originally outlined budget.

In case you need help or would like to share your ideas with us, please contact the prima:Time Support team by clicking on the black bubble in the bottom right corner of this page 🙌.

Did this answer your question?